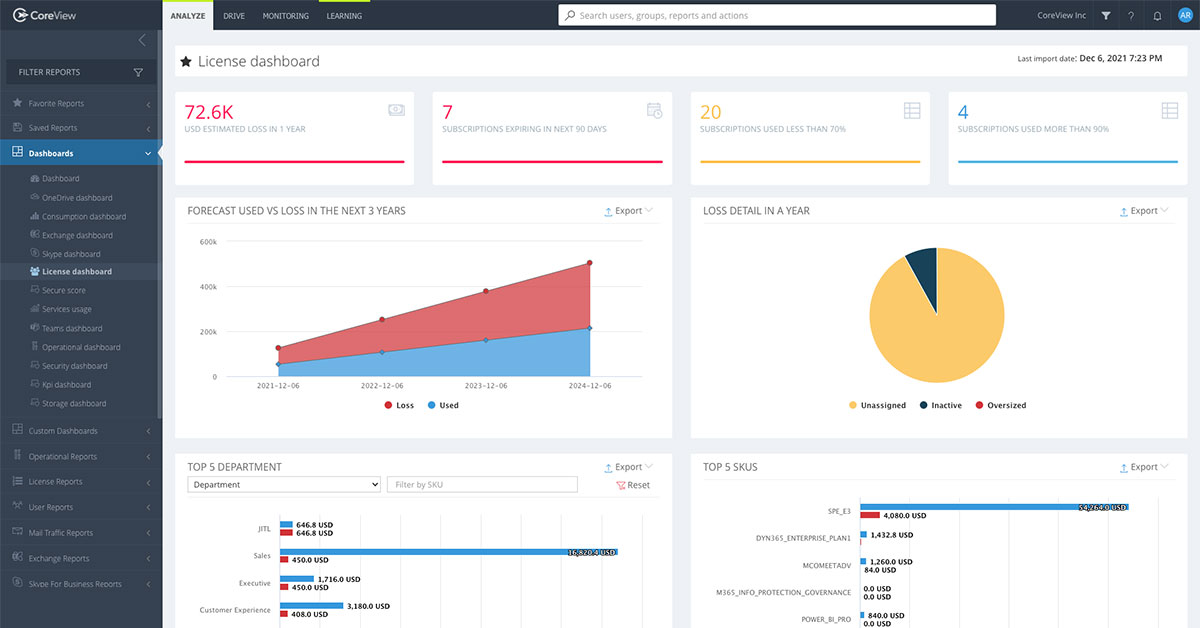 Microsoft 365 (formally Office 365) suite of Software-as-a-Service (SaaS) applications and services delivers the core collaboration and productivity tools for millions of businesses. From the smallest SMEs up to multi-national businesses with many thousands of users spread across multiple departments and geographic regions.

Managing Microsoft Office 365 deployments to ensure that the correct number of licenses are in use and that people use the applications effectively is essential. Organizations do not want to be paying for licenses that are sitting idle or underused and not delivering enhanced productivity. The built-in management and usage analytics tools that Microsoft supply for System Admins has basic functionality. Once the number of licenses gets into the hundreds, it is a time-consuming and challenging task for IT teams, or for CFOs in organizations that outsource all IT functions, to get a good overall picture of the usage profile for their Microsoft 365 deployments. Examples of such organizations who are paying for licenses and functionality that they do not use are plentiful.

Using CoreSuite helps Enterprises with Microsoft 365 use spread over multiple geographic locations with hundreds or thousands of users, get a single platform and combined reporting and management interface that tames the sprawl typical of SaaS solutions. CoreSuite makes it easy to see the overall picture and make the changes needed to maximize productivity and return on investment (ROI) for the Microsoft 365 spend.

In the segments below, we outline ten areas where CoreSuite enhances the Microsoft 365 experience and ROI for organizations.

Having access to the right data is fundamental for many business decisions. For example, tracking and optimizing the license use, and therefore the requirements for Microsoft 365 licenses within an organization requires accurate data on current use. CoreSuite delivers this usage data across the whole estate into a single view and data set that enables informed decision-making. This data set can also be split into regions or departments depending on how you segment your Microsoft 365 estate.

Many organizations still have deployed licenses for users who have left the organization. CoreSuite can identify these so others can reuse them or the overall spend on Microsoft 365 licenses reduced.

In addition to license tracking, CoreSuite also tracks applications and workload use so organizations can see what applications they pay for are being used. This is especially relevant for the feature-rich but more costly Microsoft 365 licensing tiers. If many Microsoft 365 suites are underused, they can be cut, or user uptake can be increased via training.

2. Analyze and Report Across Microsoft 365 Services

CoreSuite allows organizations to do deep dives into their Microsoft 365 licensing and usage metrics. To do this, you do not need to be a power user of the built-in Microsoft 365 Admin tools, nor do you need to revert to PowerShell-based scripting to get access to all metrics. CoreSuite allows non-technical managers and admin staff to run the reports they need for management reporting and decision making.

This reporting extends across all aspects of Microsoft 365. If a Microsoft 3655 tool is in use in your organization, then CoreView’s CoreSuite will analyze its use, capture the data, and build a report to convey usage info understandably. Reports can analyze millions of Microsoft 365 activities and report on the whole dataset, departments, regions, or specific users as required.

Irrespective of the Microsoft 365 deployment site analyzed, CoreSuite will gather the information needed to report on it quickly without impacting user productivity.

CoreSuite includes a visual workflow engine that allows non-technical users to build workflows and reports that return the information they need to do their job.

Anyone can automate report running and delivery to produce periodic and up-to-date information about the licensing, usage, and security of the whole Microsoft 365 estate, or whichever subset that is relevant to the report recipient.

The substantial amounts of functionality delivered by the Microsoft 365 SaaS stack also expose a large surface area for cybercriminals to attack. Such as targeting email via Phishing, Active Directory-based authentication, files on OneDrive, SharePoint sites, Microsoft Teams based meetings & collaboration, and much more.

CoreSuite includes reports to track the actions of Admins to determine good governance and activities, identifies the security status of Microsoft 365, reports on user permissions in use, and finds SaaS deployments within the organization that may not be known about or approved by IT.

The last 18 months have made Microsoft Teams both the internal tool to keep the business functioning and the tool used for interacting with external clients and suppliers. As such, it is vital that the experienced staff and external contacts have using Microsoft Teams is good.

CoreSuite includes detailed reporting on Microsoft Teams use across the organization. The reports can drill down to show departments and even individual users. This allows adoption and usage to be monitored in real-time to ensure efficient use.

The CoreView CoreSuite Teams Advanced Add-on builds on the already included comprehensive reporting to include call quality metrics as reported by Microsoft and by meeting participants via the 5-star rating question presented after Microsoft Teams calls. This data allows organizations to see if any of their sites, users, or customers are getting poor video or audio experience in Microsoft Teams.

If the Microsoft Teams deployment links to a chargeable public switched telephone network (PSTN), the advance add-on can report on who is using the PSTN connection to allow for the most cost-effective connectivity options to be identified and deployed.

CoreSuite ensures that true least privilege access is in use via Functional Access Control (FAC). Roles like Exchange Admin are no longer relevant. People work across the whole Microsoft 365 stack, including admins. Everyone has a role, and to fulfill that role they need access to certain functions in the Microsoft 365 stack, such as a OneDrive share, SharePoint site, Office applications, and the ability to manage mailboxes for their team members in delegated admin scenarios. Admins can assign these functions to them to make a functional group that allows them to do their job with just the access level they need.

CoreView CoreSuite allows FAC-based administration at a granular level that Admins can tailor to each organization’s needs. In contrast to Microsoft’s approach to this issue which is to provide more roles in their Microsoft 365 Admin tools.

As noted above, FAC-based administration allows delegation of functional admin rights down to where they are most suitable. But at the same time, the CoreSuite reporting allows the controls on admin and other functions to be visualized, managed, adjusted, and revoked if required.

Managing users, groups and mailboxes used to be completed using tools for on-premises (on-prem) infrastructure. Domain Controllers and Exchange servers were all sitting in a company datacenter (or private cloud) and managed by teams of administrators. With Microsoft 365 that management is now shifting…some management will be on-prem while other management activities need to be performed in the cloud using Microsoft 365 administrative consoles.

CoreView’s Hybrid Add-On allows for management of both on-prem and on-cloud users, groups, and mailboxes. Administrators don’t need to try and figure out if they need to make a change in the on-prem tool or the cloud tool…they just make it in CoreView and the Hybrid Add-On handles the rest.